This article will show you how to distinguish fake ESP8266 modules from originals. This article derives from the personal experience of the author.

This experience started when I bought a handful of ESP8266 modules, very popular microprocessors in the IoT and makers world thanks to their low price and WiFi connectivity. I bought the 3 most common models (ESP12-E, ESP12-F, ESP-7) from AliExpress, always looking for the "best price". Those were the first days when I took my first steps on microcontrollers, far from me the idea that clones of Chinese products could exist.

In the beginning, everything went smoothly: the modules did their job. The problems started when I tried to change the target channel of AP WiFi. In particular, the WiFi channel always remained number 1. After some time spent looking for what I could have done wrong, I decided to try another breakout board (based on ESP8266EX), finding that I could switch the WiFi channel without any problems.

I continued to investigate, ending up on the official site of the manufacturer of this module, AI-Thinker, the most important manufacturer of ESP modules. Observing them, I realized that the photos of the modules reported by Ai-Thinker had a silkscreen slightly different from those in my possession. Not being able to validate the images on the site (which may not be updated or may not be faithful reproductions of the physical product), I decided to purchase again the models from a more reliable shop, LCSC. As soon as they arrived, I tested the WiFi channels, and the problem mentioned above didn't emerge. Furthermore, the silkscreen was the same as the one reported by Ai-Thinker. Therefore, it was clear that I received fake and malfunctioning versions with my first purchase on AliExpress. Since I made the purchase several months before, I didn't even try to contact the seller.

In any case, I consider myself "lucky": I discovered the defect without using advanced and expensive instrumentation (often counterfeit chips can be recognized after an X-ray inspection), but simply through practical experimentation. However, since these modules could hide other defects, I proceeded to verify all the breakout boards I own to replace all the fakes.

Below in the Figura 1 and in the Figura 2 the comparison between the original modules and the fake ones. You can find some clear differences, such as the logo and the name of the pins. 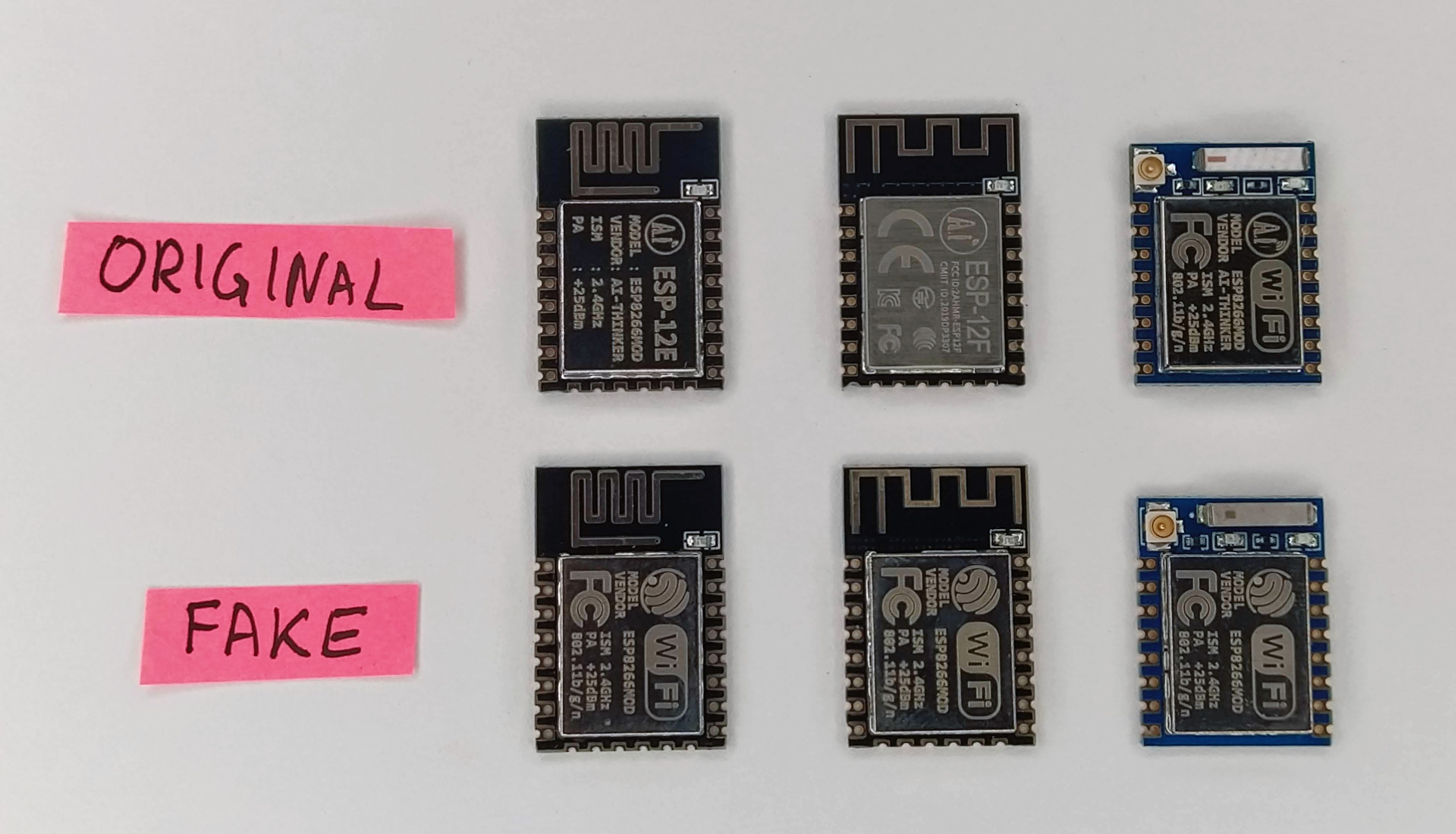 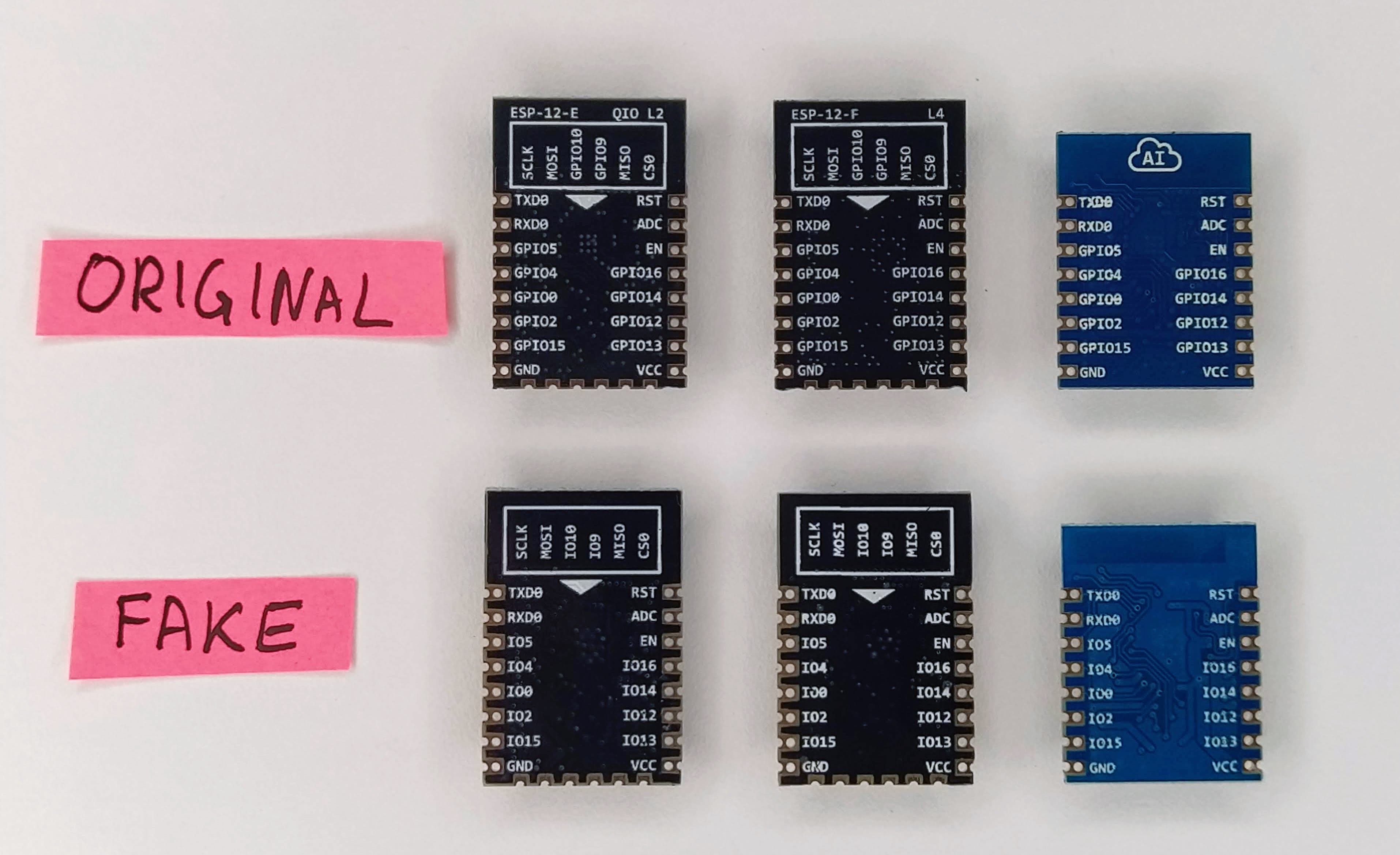 Chip counterfeiting is an often ignored or unknown problem, but it can affect anyone, both individuals and companies (as happened at Sparkfun). The only advice I can give you is to buy from specialized electronics retailers such as Mouser, Digikey, or even less known as the Chinese LCSC, and ignore the temptation to save money by buying from small and non-specialized stores. Moreover, remember to always perform a "visual" analysis of the chip, and, if possible, make a comparison with original photos of the product. Discovering a fake chip after it has been mounted can be more subtle, resulting in hard-to-find and repair damage. Old but gold, I can affirm again that prevention is better than cure!